I spent an entire day sorting through journals in order to make a list of the trends of my last ten years as written. Not just in terms of what was happening to me or what I took on but also in terms of how the act of journaling changed the way I lived my life and how I interpreted those things. (a bit of a warning that this reflection includes a deeper dive into depression, health issues and loss) 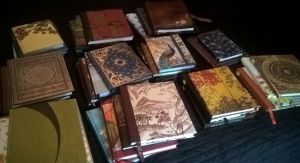 These are stacks of my journals by year from 2009-2019. Not included are any of my fiction or working journals.

Something to note about journaling is that you do NOT have to reread what you’ve written nor should you be writing in it with the intent of creating phenomenal writing. It is a place to sweep away all the messy thoughts that can otherwise consume you. I didn’t start journaling ten years ago. I started as a teenager and when I journaled I censored myself because I was trying to be clever in a way that my teenaged self thought she could be clever. Mostly I destroyed those journal pages in my late teens and it made me hesitant to journal earnestly for many years because what I’d written made me cringe so much. I do still have a few entries that escaped the culling. They still make me cringe but for different reasons. I can read between the lines and I know some of what I’d left out. But also, I know that I’ve forgotten details that I didn’t write down and I feel as though I hid myself from myself thus depriving me of the growth I could have gained through an honest relationship with myself.

It is hard to be honest with yourself if you are writing with the knowledge that a future you is looking over your shoulder in judgment.

This is why when I did start journaling earnestly a little more than a decade ago I tried to write as though no one would ever read what I wrote. By then I was old enough to realize that in all likelihood this was true. As much as I want people to read my work I also know that it is hard to get readership at an amateur or professional level and I also know that we are more complicated than other people’s impressions and judgments of our work. So, the point is that as I began skimming through my journals I found a trend toward openness within the journals that I will be forever grateful towards.

While compiling my overview of each year I took note of events, aspirations, trends and tone. It was surprising how much of 2009 was defined by this painful ambition that was overshadowed by familial problems, a struggle to prioritize my (ex) husband and school as well as trying to fight my realization that I lacked what my ambitious peers had. These issues became even more problematic in 2010 but something new was developing as a result of my journaling practice and acceptance that my ambitions were in the wrong areas of my life. I began to cook/bake, write regularly, began taking longer walks and dipped my toe back into visual arts. This was my first NaNoWriMo year. Reading over my entries I skimmed over a lot of the visceral pain that bubbled up in these private entries because I never allowed them to be visible.

I regret how little I journaled about my cat. She was a huge part of my life and was the source of true affection in the middle of constant emotional storms from the people in my life.

By 2011 I had graduated college and was trying to make sense of life outside school. Even while I attended school I applied to jobs (full time and part time), went on a few interviews but had only managed to secure unpaid internships (for collage credit). My self esteem had taken a beating and I still applied and applied to jobs which I had the skills for but I was living in a highly competitive area where people with Masters degrees competed to work as baristas. At that time I couldn’t recognize that this was a trend experienced all over by people in my age range and even as I kept working on writing in earnest I couldn’t help but feel as though there was something deficit. This angst I held in check and buried deep. It was possible to do this by continuing to pursue my creative interests and engage in more physical activity. Still, family relationships had become increasingly toxic as my father proclaimed me a failure, spouted racist and homophobic things while expecting love in return. My mother suffered the Grand Mal seizure that finally gained her admittance into a full time care facility. I felt indebted to my (ex) and the relationship was strained by the difference between what we said and what we didn’t verbalize but is clear to me now. It was also a time when I tried very hard to build friendships based on intellectual interests.

2012 was a shocking year because all of the struggles to conceive were finally rewarded with a pregnancy which was unexpected. Unfortunately the world around me was still stressful particularly on the ex’s work front. During the years we were together I supported his work life which was incredibly demanding of him and demanded much of me as well. Due to quirks in his schedule I was often the one expected to get him awake and ready to work when they would call emergently. My self esteem at the time was pretty much crushed and I didn’t recognize that these demands and my lack of boundaries had impacted my own successes. It didn’t help that his coworkers treated me like garbage. The pregnancy ended in miscarriage even despite my efforts to keep my doctors abreast of my previous history and risk factors. As I tried to find my way back into normal life I suffered from flashbacks on the miscarriage. My neighbor was pregnant and gave birth to a healthy baby and my ex sister in law was pregnant as well.

Heading into 2013 I was just trying to stay afloat and the creative pursuits enabled me to keep moving forward in the haze. It was around this time that the old life that I had been building finally began to crack open. Superficially, my ex and I were alright, stronger than ever because we had endured so many things together. But, the reality was darker especially as I’d begun to create my own light.