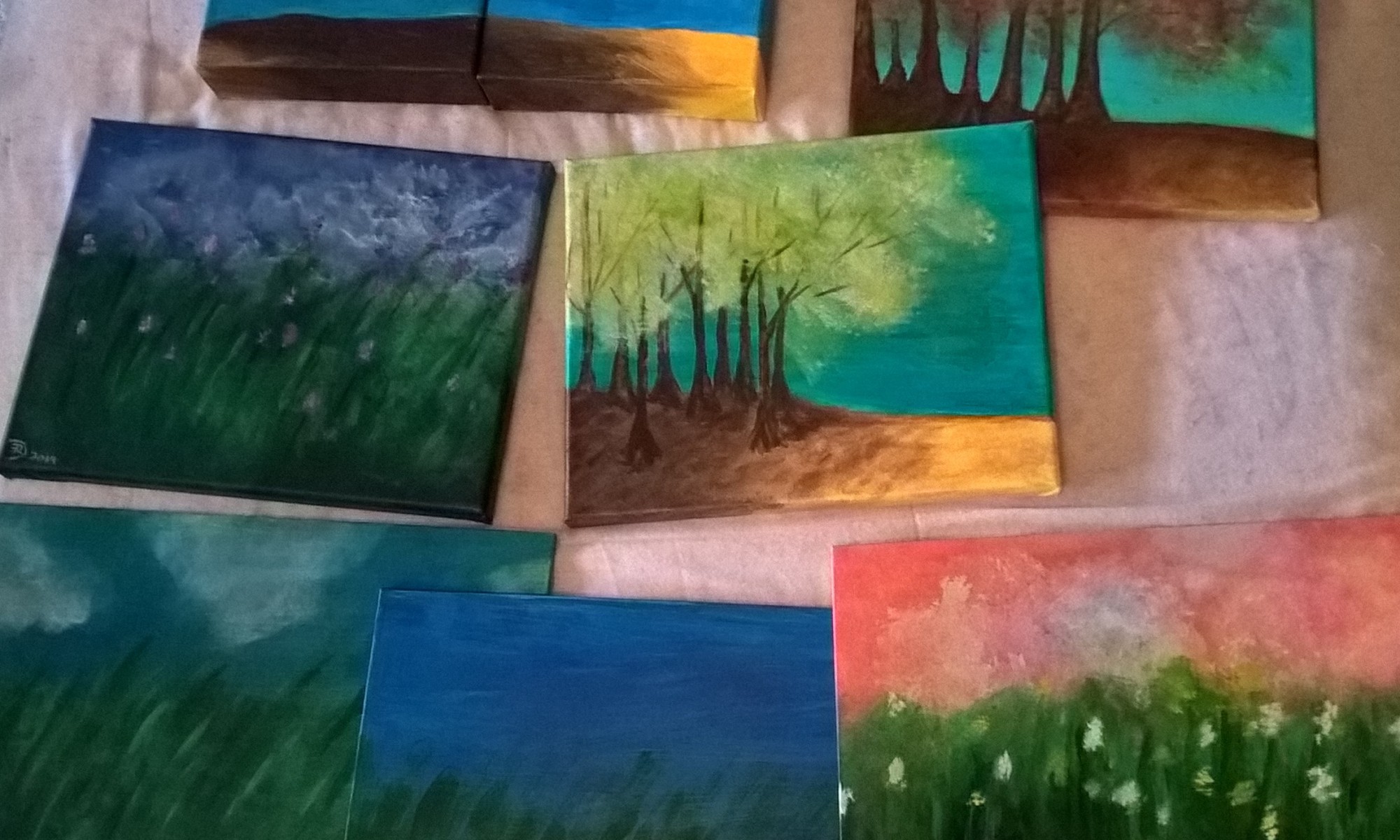 There are several layers to the topic of inspiration. As the child of artists I’ve found it readily available but being inspired and knowing what to do with inspiration are often very separate issues.

I’ve talked about my plans for this blog shifting from book reviews to something a bit more expansive. Having spent almost a month sick and then another month preparing for an event I had to put those plans on the backburner but now I can get started on these changes. The first is a series of posts delving into how to get started on creating, on journaling and on finding your voice. I think inspiration is an important place to start regardless of what you’re trying to create–art, poetry, a journal or even a journey into fitness–inspiration is what grounds us to our work and makes it important to us as individuals who are struggling to create something big from many small steps.

Into my thirties I’ve grown to appreciate the ways that I am different because of my upbringing and the advantages that come from those differences. Both of my parents were creative in their own ways and gravitated toward movies and books that supported that creativity and nurtured it in me.

BOREDOM – The concept of boredom is something I have not ever experienced. I have been in situations where I didn’t feel challenged and spaced out but this is different than boredom. I’m going to make the argument that once you know how to look for inspiration you will never find a situation that you cannot create interest in for yourself. Moments where you would normally be bored, when you’re under stimulated or have nothing to keep you occupied are invitations to allow your mind to wander. Boredom is simply the door to yourself and if you open it you have a chance to get to know your mind as it exists beyond obligation, activity, social situations or circumstances. Sometimes you’ll wander into weird worlds within yourself and other times you’ll ponder mundane topics. But this is how inspiration begins.

EXPOSURE TO “BAD” ART – When I interviewed the band members from Big Milk in the early 2000s, Luciano told me that he liked to go to see awful bands play music because it made him realize he could also continue making music. Also, see Patton Oswalt’s “Death Bed the Bed that Eats People” bit. We’ve all been exposed to great art, to movies that leave us breathless, music that we feel down to our essence and books that feel so perfect we want to weep. These are experiences that often make us want to create but that perceived perfection can kill inspiration as quickly as it ignites it. Starting any journey is messy and it won’t come anywhere near the heights you’ll expect to reach as you chase after your favorite creator. Keeping inspiration alive during this period often requires radical measures like exploring creative work made by people who were more brave than talented. I don’t necessarily like to call any art “bad” because art is about self-expression, creating dialogues or evoking emotions from an audience. Generally “bad” art is art that falls short of what it is attempting to accomplish but often the artist’s intentions bear little influence on the audience’s emotional or intellectual engagement in it. When we talk about bad art we are often talking about art that we don’t personally like and in this sense we can find ourselves more inspired by the dissonance between someone’s work we hate than we can from the embrace of work we love.

UTILIZE YOUR IMMEDIATE ENVIRONMENT – Because we have the internet it is incredibly easy to find source material for inspiration and often what people find the most offensive about the theft of their art is that concept of originality. As a teenager I was a huge proponent of this notion that art had to be 100% original and exclusively born from within me without any components that others would consider to be stolen from something better. And, that is utterly ridiculous. Inspiration cancels out the notion of genuine originality. Everything is connected. It is that connectivity and gestural element that makes our work worth something. But, don’t steal. Not because it is wrong. Not because of ownership or copyright but because you deprive yourself of the chance to discover something that comes from you. Your senses and experiences provide you with the filter for your work and that is where the originality is derived. Many famous artists painted works which look a lot like the work of other artists and gesture toward them but they use these as exercises and opportunities to enter into a dialogue and to express their own interpretation upon the original work. Collecting your inspirations together and remixing them is how you create a body of work that begins to reflect your voice and it is your authentic voice that will reach an audience.

EMBRACE OBSESSION – Creation is the best place to embrace your obsessions. Art, music, writing, dance, athletic pursuits and so many other “creative” pursuits are excellent mediums in which to explore ideas that you find yourself returning to over and over again. It can become unhealthy (which is a topic for another post later) but creativity can provide a structured environment in which to explore concepts that you cannot articulate in any other way. For me it is the topic of reality. In writing and in visual art I love to explore the notion of time, space, the mundane and the mystical. They are moments that I feel as they pass through me–the sun on my hair as I walk, a gentle breeze and the way the colors shift throughout the day. These moments are the most tangible things but they are the hardest to express and categorize which is why they are so satisfying to explore in art.

MAKE IT A HABIT – Inspiration is an enlivening element that will fill your life with fire and energy because although it seems as though it comes from outside of you it is that little nugget within you that is you. Inspiration is your voice responding to the world as you take it in through your senses and as such it is important to make a habit of being inspired. Opening your senses to all the mundane and magical elements around you and practicing in the most mundane ways in order to express what you perceive from all that is without you with all that is within you. A lot of the time you won’t be making great art, won’t be writing long books or running marathons, much of the time you’ll use your inspiration to simply test your voice.

It was only a month before the exhibit ended that I heard about "Van Gogh and His Inspirations" in Columbia, SC. Somehow it was exactly the sort of exhibit I wanted to see and the scenic drive was a great way to reset into the new year. I was struck by many things but on the day I visited it was all about color. I'm finding myself drawn to particular colors and letting it happen to see where it will take me. #abstractpainting #abstractart #abstractlandscape #ucsbalumni #artforsale
This year I'm taking on many creative challenges that I have been too intimidated to take on in the past. It is still really hard to look at my art and not compare it to other artists. However, I think comparison is often an easy way to cope with fear. Gradually I've been more willing to put my art around my home, to see it as art and that's helped me to spot not just the things I don't like but to begin noticing the bits that are captivating as well. There are a lot of things about this new year that I don't have control over. It can make it feel that much harder to think about all the ways in which I want it to be a better year than 2019. But, I think it has made it easier to accept that I don't have time for corrosive self talk and that I have to embrace the parts of the process that I value. #art #artistoninstagram #watercolor #mountainpainting #creativeprocess #ucsbalumni
Happy 2020! For the first month of this year I'm posting a series of reflections on the last decade from my journal review and applying those lessons forward into the future, feel free to join me on that journey if you like: https://clarablackink.com/2019/12/31/decade-of-reflection-1/ I woke up to a really nice, chilly morning today (Florida chilly but still) and am excited to have hot tea and make art! What are you up to? #journaling #happynewyear2020
Probably my favorite thing to draw, paint or sketch are Chinese Lanterns. There's something about how (relatively) simple they are but how many different ways there are to try to capture them. This will be my last post of 2019 but I've appreciated all the ways in which the art community on Instagram has inspired me to keep going, creating and growing creatively. Here's hoping that 2020 brings you lots of inspiration, love and light. #artistsoninstagram #floralart #chineselanterns #botanicalart #colorfulart #joyfulart