Written for the November 30, 2001 issue of CASA Classic Homes, this interview was done with Richard Doolittle owner of Fireplaces by TOTAL in Santa Barbara, California.

With a selection rivaling the largest showrooms in Los Angeles, it is no wonder that Richard Doolittle, proprietor of Fireplaces by TOTAL is proud. “I search the globe for unique and different designs. There’s largely nothing that you could think of that we couldn’t find or create for you.”

If you’re considering installing a new fireplace, mantel, or BBQ stop in and discuss your ideas with Richard. After looking at the in-store selection, taking home brochures, and doing a bit of research on your own, you’ll likely come back to TOTAL to sit down at the drawing table and map out what will warm your heart and home.

At TOTAL, fireplaces range from $350-$2500, and mantels run a little higher $1000-$20,000 depending on material and style. (Fireplaces are the part inside the wall and mantels the decorative extensions coming in anything from marble to fine wood.) Once the fireplace arrives, customers have the option of installing it themselves or having the professionals at TOTAL do it for you. After a day or two you’ll be cozy by the fire enjoying your fabulous choice.

Richard is quick to point out that indoors is not the only place for a fireplace or barbeque in Santa Barbara. “On a cooler Santa Barbara evening, when its just a little foggy outside, you may want to be outside despite the chill. With an outside fireplace or barbeque, you can light the fire and enjoy the outdoors. It’s the new thing in many Montecito homes,” Richard shared.

Always a person who liked to work with his hands, even as a boy, Richard Doolittle, naturally gravitated to the building trades. “I was the kid who would rather be building things that pursuing a career working behind a desk,” Richard shared. After apprenticing in the trades in the early 70’s, Richard started his plumbing and heating business and has successfully operated Total Heating & Air Co. for over 20 years here in Santa Barbara. Having been an independent Lennox Heating Dealer for many years, Richard jumped at the opportunity when approached by Lennox to become a Lennox Hearth Dealer and Fireplaces by Total was born!

Originally hailing from Pasadena he has lived in Santa Barbara for most of his life – the last 31 years. “When some friends who were moving here, took a weekend trip and said ‘Santa Barbara looks pretty great, do you want to come with us’ I gave it a try and have been here since,” he shared.

Connie, Richard’s wife, is a registered nurse who worked at Cottage Hospital until the arrival of their daughter Keira, a year ago, Richard enjoys the role of father. His work ethic and caring make their way into the community through his involvement with Transition House and Christmas Unity.

In addition to being a husband, father and business man, Richard is an avid tennis player. 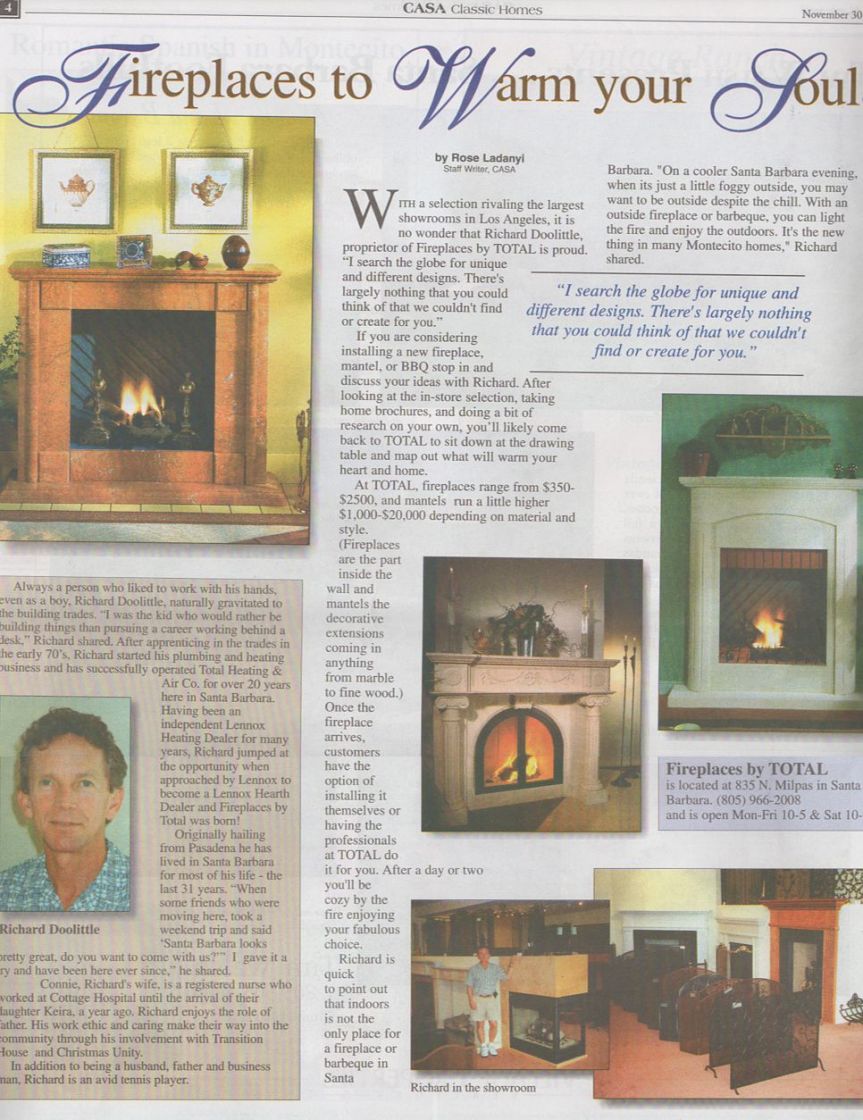